BIM Designers Wall Module provides automatic reinforcement design and performs the necessary verifications according to international codes for bearing and shear walls. The module will be introduced to the public starting with the official release of 2020 Graitec Advance Suite.

The software also automatically generates drawings, diagrams, and reports. Based on the generated reinforcement cage, the Wall Module generates, with the help of the ”Bill of Materials” command, the necessary quantity of materials as well as their total estimative cost. The prices of the materials are defined by the user per unity. 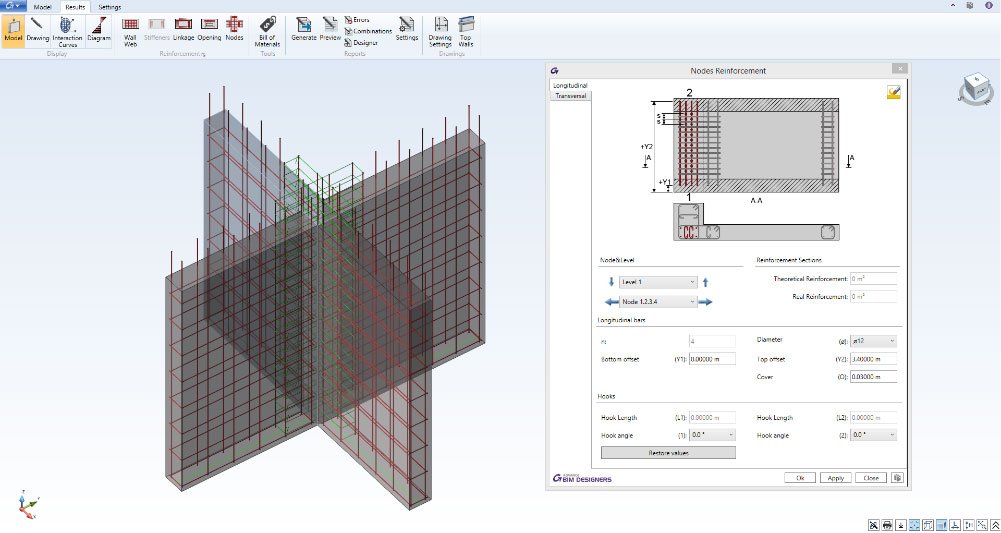 In the first place, the user defines the geometry of the model that is to be designed. The software can be used for both individual and group of walls (with or without openings).

In the next step, the calculation assumptions have to be defined. In this respect, the Design Assumptions command opens a window where two calculation methods are available: 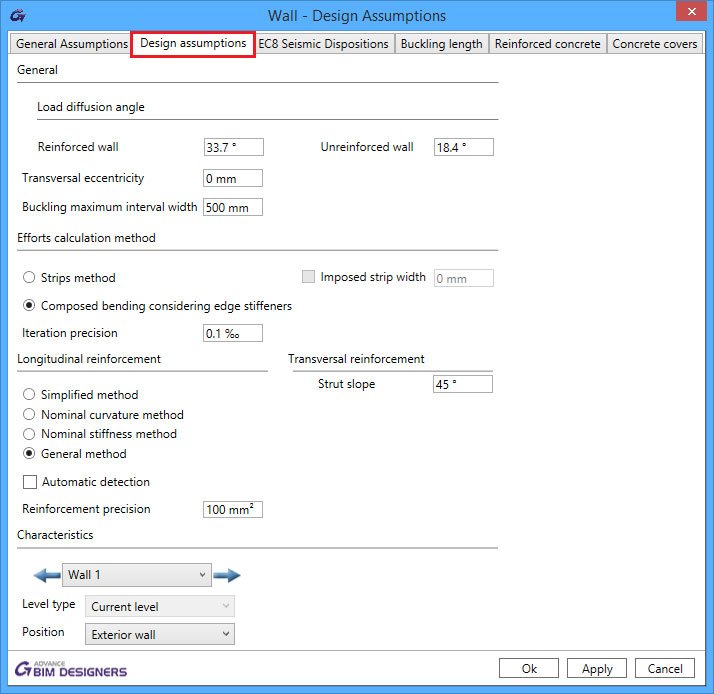 In this step, of defining assumptions, the user can also choose the concrete class, the rebar steel resistance, the support conditions and the concrete covers. 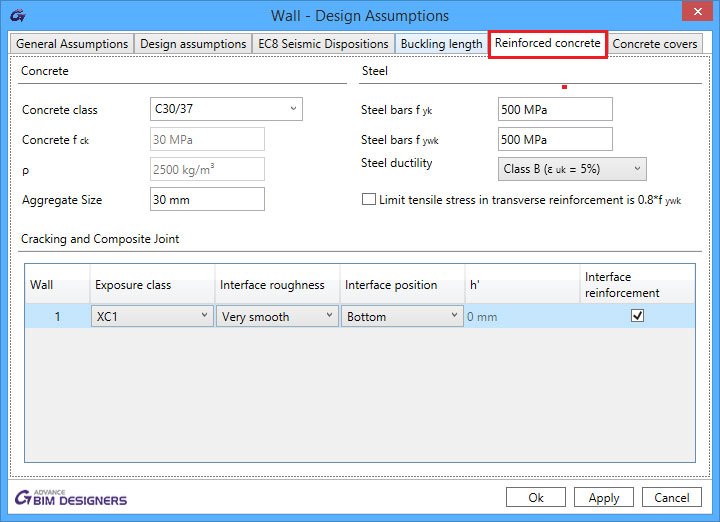 Further on, the reinforcement cage can be designed using individual bars or fabrics that can be selected from large international libraries or can be manually customized based on users’ preferences.

The resultant forces can be applied on individual walls – for designing the reinforcement of each wall – and on a group of walls-for assembly verification.

After the wall/wall group automatic design is performed, a verification of the assembly is done using graphically displayed interaction curves. The interaction curves verification takes into account the resultant forces defined for the group while the design is performed considering the resultant forces defined for each component of the group. 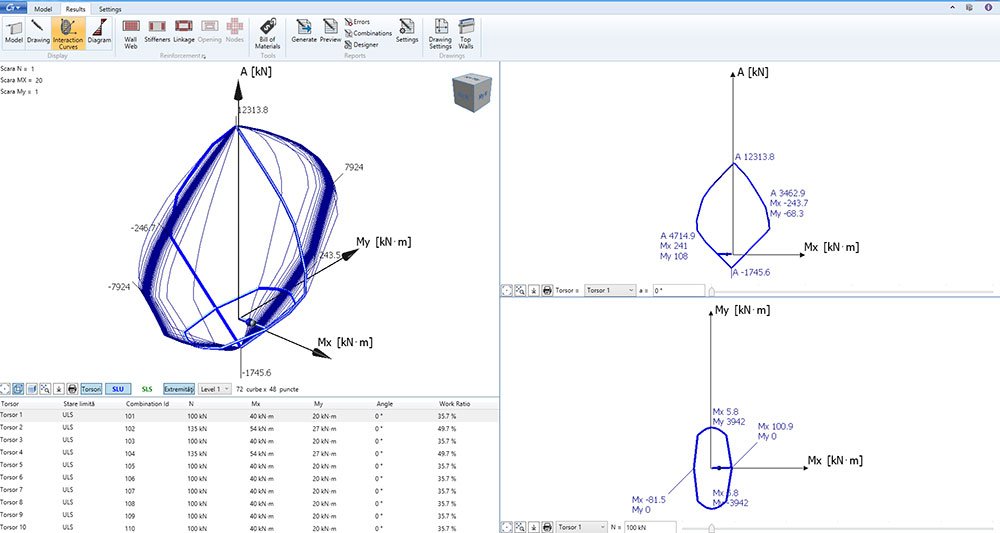 The “Calculate” command will automatically generate a customized reinforcement cage consistent with the user-defined assumptions as well as with international codes and norms. If the wall is reinforced using fabrics, the fabric sheets will be automatically placed by the software in an economical way in order to save as much material as possible and to reduce costs.

After the command is launched, the automatically generated drawings, diagrams, and reports become available.

The module generates the wall reinforcement cage based on constructive dispositions (i.e., minimal requirements imposed by international codes). After the preliminary reinforcement cage is verified using the “Verify” command, the user can manually adjust it and perform a rerun of the model verification until there are no more errors or warnings.

The “Calculate” command is used to obtain a customized reinforcement cage. After the user applies the desired adjustments to the reinforcement cage based on their particular interest, the “Verify” command will be performed to check if the model still respects the assumptions as well as the international codes provisions. For example, this workflow can be particularly useful when the user wants to check if the wall model meets the assumptions and norms provisions after they have defined smaller bar diameters, greater spacing between bars, smaller number of bars and so on.

As all other BIM Designers modules, the Wall module runs as standalone software or can be used as an add-on for Advance Design and Revit©.

The BIM Designers Wall module automatically generates reinforcement based on user-defined assumptions and international codes for bearing and shear walls. The tool can be used to generate the most efficient reinforcement cages from the point of view of materials consumption. The software also automatically generates drawings, diagrams, and reports.

More news is the same category

We use cookies on our website to give you the most relevant experience by remembering your preferences and repeat visits. By clicking “Accept All”, you consent to the use of ALL the cookies. However, you may visit "Cookie Settings" to provide a controlled consent.
Cookie SettingsAccept All
Manage consent

This website uses cookies to improve your experience while you navigate through the website. Out of these, the cookies that are categorized as necessary are stored on your browser as they are essential for the working of basic functionalities of the website. We also use third-party cookies that help us analyze and understand how you use this website. These cookies will be stored in your browser only with your consent. You also have the option to opt-out of these cookies. But opting out of some of these cookies may affect your browsing experience.
Necessary Always Enabled
Necessary cookies are absolutely essential for the website to function properly. These cookies ensure basic functionalities and security features of the website, anonymously.
Functional
Functional cookies help to perform certain functionalities like sharing the content of the website on social media platforms, collect feedbacks, and other third-party features.
Performance
Performance cookies are used to understand and analyze the key performance indexes of the website which helps in delivering a better user experience for the visitors.
Analytics
Analytical cookies are used to understand how visitors interact with the website. These cookies help provide information on metrics the number of visitors, bounce rate, traffic source, etc.
Advertisement
Advertisement cookies are used to provide visitors with relevant ads and marketing campaigns. These cookies track visitors across websites and collect information to provide customized ads.
Others
Other uncategorized cookies are those that are being analyzed and have not been classified into a category as yet.
SAVE & ACCEPT